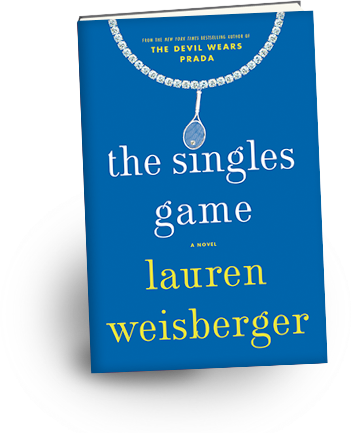 The new novel from the New York Times bestselling author of The Devil Wears Prada and Revenge Wears Prada—a dishy tell-all about a beautiful tennis prodigy who, after changing coaches, suddenly makes headlines on and off the court.

How far would you go to reach the top?

Under Todd’s new ruthless regime, Charlie the good girl is out. Todd wants “Warrior Princess” Charlie all the way. After all, no one ever wins big by playing nice.

Celebrity mags and gossip blogs go wild for Charlie as she jets around the globe chasing Grand Slam titles and Page Six headlines. But as the Warrior Princess’s star rises on and off the court, it comes at a cost. In a world obsessed with good looks and hot shots, is Charlie Silver willing to lose herself to win it all?

Sweeping from Wimbledon to the Caribbean, from the US Open to the Mediterranean, The Singles Game is a sexy and wickedly entertaining romp through a world where the stakes are high—and no one plays by the rules.